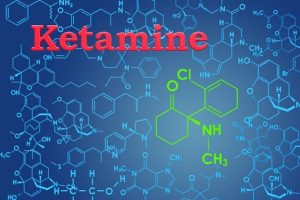 Surgeons and physicians alike have spent centuries looking for a safe, reliable method of easing pain and discomfort during surgery and other medical procedures. In the mid-1920s, scientists thought they had developed a solution in the form of a synthetic drug now commonly known as PCP. Unfortunately, this fast-acting anesthetic had a number of problematic side effects, including severe and long-lasting hallucinations. In 1962, scientists thought they had found an answer with a derivative of PCP: ketamine. Ketamine, it was believed, offered the fast-acting anesthetic qualities of PCP but with less severe psychotic symptoms. It became known as a “dissociative anesthetic” because patients would enter a dream-like, or disconnected, state of mind during treatment. Ketamine received FDA approval in the United States as an anesthetic in 1970.

Throughout the 1970s and still continuing through today, ketamine continues to be used as a fast-acting anesthetic under certain circumstances. Its greatest popularity as an anesthetic came during the Vietnam War, when it was the most common battle field anesthetic, easy to administer and often the only option for dealing with battle-field injuries. It is still used extensively as an anesthetic by veterinarians, as it does not appear to have the same potential for psychotic side effects on animals as on people. Among physicians, it is used primarily with young children, burn victims, and individuals undergoing minor surgical procedures; however, the medical community continues to utilize it with caution because of the potential for hallucinogenic side effects.

Although ketamine offered promise as a fast-acting anesthetic for physicians seeking to offer their patients relief from pain, the history of ketamine also has a much darker side as a hallucinogenic street drug. During the 1970s, some sub-cultures used the hallucinogenic properties of ketamine to explore so-called “New Age spiritualism”, “mind exploration”, and other altered states of consciousness. During the 1980s and continuing through the 1990s, however, the illegal use of ketamine—commonly called “Special K”—spiked as a popular drug at clubs, dance parties, and raves. Increasingly available as capsules, powders, tablets, crystals, liquids, and injectables, ketamine was often confused with and mistaken for a similar club drug known as ecstasy.

Ketamine Emerges as a Treatment for Psychological Disorders

Ketamine continues to show real promise for the medical community, particularly for scientists, physicians, and psychiatrists seeking a safe yet effective treatment for mood disorders and other mental illnesses, as well as chronic pain. Active research into the field of NMDA receptor blockages—stemming from research relating to the use of opioids—noted ketamine as an NMDA receptor blocking agent. In 2006, researchers at the National Institutes of Health published a study showing that a low dose of ketamine, delivered intravenously, could relieve severe depression in just a few hours.

In the last decade, an increasing body of research indicates that ketamine infusion treatments—the administration of a low dosage of ketamine directly into the blood stream—has proven to be an effective treatment approach for patients suffering from:

While the use of ketamine for depression and other mood disorders is not yet approved by the FDA, and therefore considered an “off-label” use, it has provided real, effective relief for patients who have not responded to other drugs or who cannot wait for more traditional antidepressants to “kick in”. We believe that continued research in this area will continue to highlight IV Ketamine Infusion Therapy as a vital treatment option offering many patients real and much-needed relief.

If you or someone you love is suffering from a serious mood disorder and has not been able to find relief through traditional therapies, we encourage you to contact Dr. Steven L. Mandel at Ketamine Clinics of Los Angeles immediately to find out if IV Ketamine Infusion Therapy may offer a solution.